All the content that was removed before the game was released and discovered in the Game files. All these files can be viewed with the game editor, which can be installed if the user has UT3 files, tutorials can be found on Youtube.

A perfectly usable weapon. The game does not give the player a chance to use it however. Only usable with mods.

Only the animation is left, and it is a one handed weapon.

It was meant to be added in Chapter 8 or 9, only the animation is left, and it is a one handed weapon.

There are animation left overs for the following weapon.

There are left overs noting that the player can carry this item.

Listed in TdGrenade throw marker. Removed because they are dangerous and are not to be used by the City Protection Force, because suspects (like Faith) lack powerful weapons.

It was meant to be used as a weapon.

Meant to be used as a handgun. Uses placeholder weapon sounds.

There was going to be a final roof battle on the top of the Shard. A recreation of it can be seen on the video to the right. There were gonna be a few waves and snipers (not in the video). The strange disappearance of the PK SWATs in the ending cut-scene can be explained by this, including that the level is structured to have Faith jump into the helicopter in numerous spots. Jacknife also uses the unused voice files he was meant to use.

Unknown reason why they were removed. Probably used in Chapter 9. Possibly used with the same way as Celeste; they shoot you with their Assault Rifles and then when you get close they drop it and run after you with a taser judging by the concept artwork. They are very accurate, that means they only miss 50% of the time. They shoot in very accurate 3 round bursts; it hits the player, misses the player with another burst and hits the player again; probably the most accurate AI similar to the sniper. It is the similar model as displayed in the artwork.

Originally, the player was meant to fight Travis. There are animations left in the files and sound files ready for use.

There are left overs possibly from the atmosphere testing phase, aswell as other sound effects, like dog barking. In the file "A_VO_Extra.upk" there are voice files of Faith insults, like "Jerk." or "Idiot!" and "Son of a bitch.". It's not clear to why they were left out. There were also going to be monologues of Faith reflecting, although only one of these still remains in the game during The Shard chapter.

In the game's files there are models of other characters used in first person. They consist of Faith, Merc, Jacknife, Celeste, pursuit Celeste (the white assassin model), a pursuit cop, and the unused black pursuit cop model. Multiplayer could've been planned for the game. 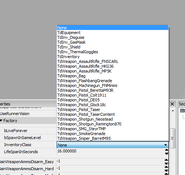 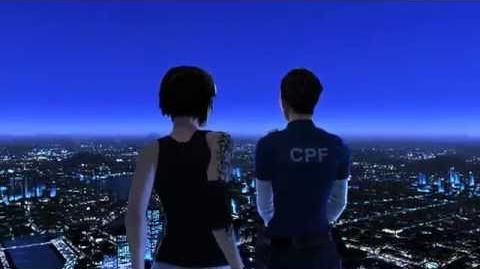 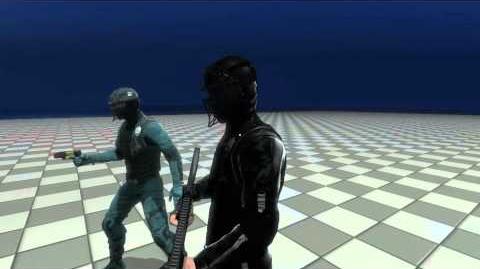 A CPF officer with his weapon set as the bag.

Prison level concept art. It's a cut interrogation scene that was meant to be a part of the prison level.

The second version of the Pursuit cop, with his first variant.

Concept art of what can explain the second version of the Pursuit cop.

The riot shielders are not meant to be killable in the game. When killed the riot shield will not detach from the mesh and cause it to bug out.

One of the many 1st person models. Merc's 1p model.

The second version of the Pursuit cop's 1p model.

Riot shielders have a unique disarm animation. However disarming them in the actual game is almost impossible without cheats.

Strange unused SWAT model. With the words, "Heavy," on the helmet.