The City is a large dystopian metropolis, and the setting of the original Mirror's Edge. Colorful and vibrant, the majority of the colors within the city are white, blue, and orange (with a lack of red), while many building interiors are white, red, and green. It is under constant reconstruction and renovation, as construction materials and equipment appear in nearly every area.

“Once, this city used to pulse with energy. Dirty and dangerous, but alive and wonderful. Now, it’s something else. The changes came slowly at first. Most didn’t realize, or didn’t care, and accepted them. They chose a comfortable life. Some didn’t. And those who refused to conform were pushed to the sidelines. Criminalized. They became our clients.”

It began with a law movement known as the Citizenship Program; a program designed to ensure easier living by offering governed city solutions to the city's citizens. Various problems were stamped out as a result of the program, such as smoking and obesity. Those who wished to lead alternate lifestyles to what the city offered, however, were faced with difficulty if not outright blocked.

The Libertas movement arose to challenge the program’s way of dictating how people should live however as the demonstrations became more heated they eventually degraded into the November Riots and illegalized.

The city gradually became restructured to ensure better security and public safety; the architectural phenomena becoming known as New City, the remaining and slowly declining pockets of the original city became known as Old Town; turning into self-run ghettos and shabby streets without the benefits found in New City districts.

The non-conformers; those who did not wish to live under the program’s laws, were either criminalised, left the city or started forming underground groups to support their way of life. One such group was an underground specialized courier service known as Runners who ferry and deliver packages and various communications across the city beyond the city’s surveillance and censorship, however the city officials have been making progress in stamping out these ’‘illegal alternatives’‘ as well. 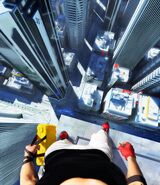