Erika Connors worked for them designing parts of a new camera.

Silvine Security is also featured in the trailer of Mirror's Edge Catalyst that was announced at E3 2013 in June. Logos for the company can be seen on the walls of the building in the scene of Faith fitting her glove during the trailer.

Silvine Systems is the premiere software and hardware manufacturer in Cascadia. Their attention to detail and quality quickly propelled them to the top of the market where they proceeded to assimilate all competition. They are involved in several cross-collaboration projects with Kruger Holding and Everdyne Energy and their products range from advanced wearables to surveillance systems, entertainment systems, and personal data tablets. 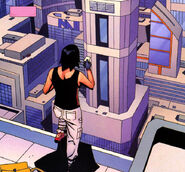 Faith running past a Silvine advertisement