The Shard is the city hall for the City regime and Callaghan's office.

The Shard was constructed in 2012 by architect J.C. Thomas.

Faith went into The Shard to rescue her sister, destroying the equipment that monitored the City's communications and leaving nine people dead in the process. This was reported as a terrorist attack, allowing sensitive information to flow freely temporarily until the databanks were repaired. A helicopter brought down during the event damaged a part of the building.

The Shard has over 100 floors and it's the tallest building in the City. In comparison to surrounding buildings, the Shard appears to stand between 150 and 200 stories tall. The estimated roof height is about 550 meters. The building contains both commercial and residential dwellings and an observation deck. The Shard holds most of the offices for the government and Mayor Elaine Callaghan's office. The higher floors contain large electronic consoles that monitor all electronic communication in The City. The roof of The Shard contains 2 helipads and 3 large antennas.

No photography is allowed between floors 99 and 110. It should be noted that the structure itself was possibly built with cryptic coloration (camouflage) architecture in mind, comprised mostly of the same blue hues as the sky. Aside from visual appeal, the building is designed in such a way that it "blends" in with the city, its outline the only proof of its presence. Given its staggering height, one might say the Shard represents the ubiquitous, "panopticon" presence of being everywhere at once; hinted by being the central hub of collected information across the metropolis.

The Shard is the tallest building in the City of Glass and Cascadia. Only eXecs can have access to The Shard. It stands an impressive 8,000 feet tall, along with being nicknamed "The Sky City". The Shard appears to be isolated on it's own island, yet dominates the skyline as the tallest structure in Glass. Despite going by the same name, Catalyst's Shard has a much different design, including 2 large turbines likely meant to produce power built into one side of the structure and another near the top of one of the upper towers. The aftermath of the game leaves the upper portion of The Shard heavily damaged, and one of the turbines destroyed.

In the Shard in Mirror's Edge Catalyst, if you manage to backtrack far enough down the rails at the start of the building after dodging a couple of trains, a giant rat three times the size of the trains can be seen rushing towards you, killing you on impact. This could possibly be paying homage to the easter egg found in the original "Mirror's Edge", where if you shoot at a specific object, an enormous rat will run through the street at high speed.

Concept of the Shard taken from the unlockables 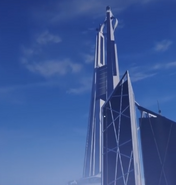 The rat found on the rails