Runner bags are yellow, multi-pocketed bags used to carry items and/or documents during a Runner's run across the City of Glass, built to be durable to keep the items safe during transportation. It should be noted that Runner bags are not the only form of containers Runners use to transport items. Smaller, yellow cylinders have also been used most probably for smaller, lighter materials.

Each bag of varying design contains a primary storage area with around 6 additional pockets (3 clasped and 3 unclasped) for additional materials. The bags can be a single strap, or shoulder strap.

The bags are usually stored in one of several marked locations or drop points, hidden from casual observation. To aid Runners in locating bags quickly, they are colored yellow for easy identification. Runners are usually informed of a bag's location and destination by their Tracker, after which they set out to retrieve the bag and deliver it to its destination or, if the job requires it, pass the bag and its contents on to another Runner, who then delivers it to its destination.

A bag's drop point is marked by a Runner's symbol or tag; in Faith Connors’s case, however, bag drop points are marked by red Runner glyphs (the "Mirror's Edge" series logo).

Handmade in San Francisco by the bag company, Timbuk2, EA games released a limited series of Mirror’s Edge messenger bags to be included in the game’s limited edition Mirror’s Edge Runner’s Bag bundle which include a copy of the Mirror’s Edge game and a bag for 130 dollars. Coming in either an original red design or a yellow design based off of the messenger bags in the game, each bag is made from heavy duty ballistic fabric.

In the Mirrors Edge video game, 30 Runner Bags are stashed all over the game, 3 in each chapter. Each are marked by Runner Glyphs, the red Mirror's Edge logo, spraypainted onto nearby walls or vents. Obtaining 11 unlocks Ran Out Of Fingers, while collection of all 30 unlocks the Packrat achievement/trophy, one of the 3 highest achievements you can get on the Xbox 360 version of the game. Bags can still be collected in Speedruns, but are disabled in Time Trials.

The red bag released with the Xbox360 game 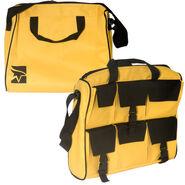 The yellow bag released with the PS3 game

A Runner bag in the Battlefield 3 Operation Métro

A render of a Runner bag
Community content is available under CC-BY-SA unless otherwise noted.
Advertisement