"Ropeburn" is the fourth chapter in "Mirror's Edge".

After Heat, Faith Connors tells Mercury to set up a meeting with Miller and her. Telling the officer about what she heard on the last chapter, Miller aims his pistol at the Runner. He reasons that he must arrest or kill her in the hopes of getting the police interrogators to ease up a bit on Kate Connors. However, Faith counterattacks and takes his gun, and both hold each other at gunpoint. Faith doesn't shoot, and hands back Miller's weapon for "Kate's sake" and leaves the scene.

Heading for the abandoned building Ropeburn mentioned, she sees a City Protection Force helicopter heading towards the building also, most likely it was the person Ropeburn was meeting, as Merc concludes. Getting there, she finds out that Miller is the one who was meeting the ex-wrestler. Thinking that Miller is a traitor, she attempts to go into the meeting. Getting there, she gets ambushed by Ropeburn, who grabs her and throws her to a lower part of the roof. Trying to get up, the tough wrestler gets down to Faith and attempts to swing a metal pipe at her. Faith managed to grab hold of it and kick Ropeburn off the building (if failed to grab the pipe, Faith would get hit and Ropeburn would throw her off the building, forcing the player to restart). Holding on for his life and rather than risk falling to his death, Ropeburn confesses that he framed Kate and hired a professional to kill Robert Pope, and then tells her that he set up a meeting with the killer the next day at the New Eden Mall. Faith then asks how Miller was involved, but the man wouldn't say anything until she would get him up. Merc warns Faith not to trust him. For when Ropeburn tries to grab Faith's hand to pick him up, he gets shot in the back by an assassin with a Barrett M95. Critically injured, he lets go of the building and falls to his death.

Knowing only a few more pieces to the puzzle, the Runner narrowly escape City Protection Force going into the building they were in. Entering a subway station that was attached to the lower floors of the building, Faith (under fire by Blues) enters passageways to get to the subway tracks safely. Cornered with no sight of escape, Merc tells Faith to jump on top of a passing subway train and ride it out. Faith leaps from train to train in an attempt to lose her pursers. In a desperate act, the Blues attempt to halt the passage of all the subway lines in order to stop the elusive Faith. The train screeches to a halt, knocking Faith to the ground as it stops. Another oncoming subway train comes speeding toward the stopped train car. Running as hard as she can, Faith dashes into a maintenance tunnel side door, narrowly escaping death as the subway crashes. She meets up with Celeste outside and the two successfully escape the area. 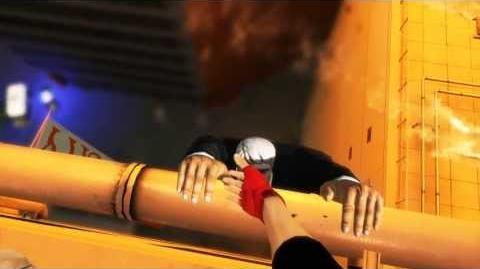