The "Mirror's Edge" comic series is a limited run of six comics published by WildStorm Productions detailing events that occurred before the Mirror's Edge game. The comic is drawn by Matthew Dow Smith and written by Rhianna Pratchett, based on the latter's ideas for a prequel story while developing the game.

Announced during Comic-Con 2008, the comic book adaptation would be a joint venture between DICE and WildStorm; a division of DC comics. A bonus six-page comic was also released during the convention.

Despite being advertised as starting in November, the first issue of the series was released in December, 2008, with the next issue beng released in February, 2009, and the other issues being released monthly afterward. After the series’ conclusion a trade paperback was released in 2010; collecting all six issues and bonus production artwork.

As with the game, Faith Connors is the story’s main protagonist as she seeks to unravel a mystery involving her parents. Other staple characters from the game also make their return, with Mercury acting as Faith’s Tracker and Faith’s sister, Kate Connors, just starting her career as a CPF officer. Additional characters include fellow Runners Clarence E. Kreeg and Drake; both of whom were lightly touched on in the game, some of the city’s citizens and most notably Faith’s mother, Erika Connors and father, Abraham Connors.

Set before the events of the game the comic’s story is still located in “the City” but reveals additional districts (such as Old Town and the New Eden Estates) and covers more about the November Riots and Faith’s own family history.

During Comic-Con 2008, DICE announced it would create a limited run comic book adaptation of the game together with team with DC Comics division WildStorm. Drawn by Matthew Dow Smith and written by Rhianna Pratchett a special mini-comic was released during the event. 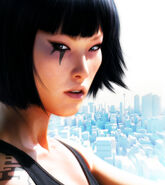