Lieutenant Miller is Kate Connors' superior and a City Protection Force officer. Kate tells Faith to go to him if anything goes wrong, which she later does.

Miller was introduced after Kate tells Faith to go to him in a Pre-Chapter cut scene. He is notably different to the other characters in Mirror's Edge because of his striking white color scheme and a pair of high-caliber pistols (apparently quite powerful, as he later kills heavily armored opponents with a single round). Although he initially doesn't trust Faith, after a bit of persuasion he trusts Faith in her accusation that Kate did not kill Robert Pope (as he tells Faith that he already knew Kate would never do such a thing).

Like Faith, Miller went on a search for clues to prove Kate's innocence. He even arranged a meeting with Travis Burfield, AKA Ropeburn. Shortly afterwards Burfield tells Faith that no one can threaten him. He also appears to assume Faith is working with Miller--implying that Miller threatened him in order to assist Kate.

In the final chapter The Shard, Miller goes to the Shard and was partnered with a pair of Pirandello Kruger armored guards. When Faith was eventually ambushed by them, Miller kills the guards with his high-powered pistols. Helping the Runner by guiding her with the security cameras and communication (in a similar way to Mercury), he was able to guide her to the Server room before being discovered. Gunfire can be heard over the comm before it abruptly cuts off. His current status is unknown. 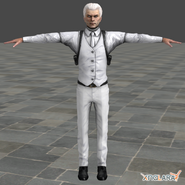 Concept art from the unlockables.

Concept art from the unlockables.
Community content is available under CC-BY-SA unless otherwise noted.
Advertisement