Kate Connors is Faith Connors’s twin sister and polar opposite. More sensible and reliable, and maybe a little more naïve, Kate believes in the “good” of The City, and joined the police force to help preserve it. She doesn’t like Faith’s clientele. Faith doesn’t like cops. Their very different paths have kept them apart for years, but Kate still has a lot of affection for her sister and trusts her implicitly.

Born into a family of four, Kate grew close to her father while Faith Connors grew close to their mother, Kate's parents were protesters against the rise of the City regime that was seeping into the The City. With her father providing funds and leadership to the Libertas movement her parents brought their two children along to their protests. Kate and her sister, Faith, had seen their mother killed during the November Riots, crushed to death as others sought to escape. After her mother's death her father became depressed due to guilt to the point of alcoholism.

At the age of 16, Faith left her father and Kate, to live on the streets. After a series of burglaries, that were later found to be enacted by Silvine Security Systems, Abraham Connors sent Kate to live with an Aunt in New City while he stayed in Old Town, later setting the house up for sale under Kate's name. It is presumed that, at some stage, she applied to become a Police officer and was accepted into the City Protection Force.

Later on, Faith who now started looking for clues as to what Silvine Security Systems might be searching for in their old house, infiltrated a demolition site for a New Eden Estate in order to gain access to the house. Kate, having deduced that it was Faith that was the “crazy girl that had jumped off of a crane to get in”, confronted her in the house just in time for the two to escape before the demolition charges went off.

Now a junior Officer, Kate conducted a follow-up check with Robert Pope in his offices about a series of break-ins that occurred the week before. He then asks Kate about Faith. Suddenly, Kate was attacked and lost consciousness and when she awoke, found that Robert Pope was shot and killed with her gun. Having been listening in over the CPF radio chatter, Faith arrives when the radio announced the reporting of gunshots from the mayor's office that Kate was in. Faith tracks down her sister and finds her sister pacing around Pope’s body. Promising to help, Faith took a piece of evidence from Pope’s desk and escaped the CPF forces to begin her own investigation into the murder. Meanwhile Kate is charged with murder, and later found guilty, for Pope’s death.

Faith, having found the real murderers but unable to expose the lies, ambushes the convoy carrying Kate to prison from a rooftop and tells Kate to head for Mercury's hideout. Soon after, however, Faith goes to Mercury's hideout and finds that it has been destroyed by Pirandello Kruger forces and Kate was recaptured. Faith learns that Kate was taken to the Shard building presumably to be transported directly to jail from there. Forming an alliance with Lieutenant Miller, Kate’s superior in the CPF, Faith, in her battle against the Pirandello forces, causes the destruction of the city’s surveillance servers in order to gain access to the building’s roof where she discovers Jacknife holding her sister at gun point and loading her into to a drop-off helicopter. Undeterred, Faith jumps onto the helicopter, resulting in Jacknife being thrown from the helicopter, and finally manages to save her sister. 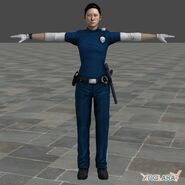 Kate and her father

Kate during her patrol
Community content is available under CC-BY-SA unless otherwise noted.
Advertisement