The Janitor is a mysterious individual who seems to have a far reaching presence in The City.

Presumably under the employment of maintaining the City, the Janitor leaves various childlike graffiti messages near or around Runner bag drop off points that seem to allude to various events, items, individuals or locations.

He has a maintenance office in the Subway near Renolds Street where he keeps a pet albino rat named Scruffy. 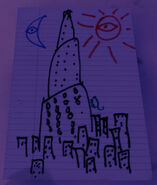