Isabel Kruger was born Caitlyn Connors, the daughter of Martin Connors and Erika Connors, they were killed during the November Riots. She is also the younger sister of Faith Connors, for a long time she believed Faith to be dead as well, her only means to cope with that loss was to convince herself that Faith never existed. Gabriel Kruger adopted Caitlyn and gave her a new name.

She possibly suffers from a chronic lung disease that was kept in check by Reflection until Faith destroyed it.

She holds 3 degrees from Kruger University.

Isabel is first seen accompanying Gabriel Kruger during his visit to Elysium Labs. She subdues an OmniStat agent who infiltrated the labs, but the agent dies from cyanide poisoning. Faith appears out of hiding, steals the agent's drive, and Isabel briefly chases after her before Faith blocks her way with a door.

Later, she is there during the raid on the Lair, where she is seen with KrugerSec agents transporting an incapacitated runner (most likely Noah) into a VTOL, but her role in orchestrating the raid is unknown.

Because of her role in (supposedly) Noah's death, she is kidnapped by the Black November resistance movement and taken to their hideout underground in the OmniStat tunnels. When Faith questions her, she reveals her knowledge about the location of Noah: that she doesn't know. But instead helps her sister by telling her where she could find such information, and Faith promises to free her in return for her assistance.

But after the infiltration of KrugerSec HQ (where Faith realizes that she and Isabel are sisters), Rebecca Thane and two Black November agents take Isabel into the tunnels to shoot her. Faith intervenes and saves Isabel's life by pleading with Rebecca, and bargaining with Rebecca to take Isabel topside after complaining several times that she finds it hard to breathe. Immediately topside, Reflection is triggered and KrugerSec is alerted to her presence, and so, send squads to retrieve her.

At the end of the game, she appears during Faith's final confrontation with Gabriel and she tries to prevent the destruction of Reflection, but fails. She takes off with Faith pursuing closely behind. When Faith catches up with her, Isabel proceeds to attack Faith and berates her for abandoning her, the two argue even while the Shard is falling apart around them. Then, Gabriel Kruger appears and is about to have Faith shot, when Isabel (mirroring the actions of her sister, earlier in the game) places herself between the KrugerSec agent and Faith. But the Helipad begins to crack, and the VTOL is veered into the building. Isabel saves Faith from falling to her death, but once she is certain her sister is safe, goes to help her father, despite Faith pleading her not to. Evidently, she was unable to save her father, and escapes in a VTOL without him. She shares one final, wordless parting with her sister before flying away.

In the final cutscene of the game we find out that Johanna Kruger, the director of Kruger Holding, has named Isabel as Gabriel's successor and the new CEO of KrugerSec, since he is still missing.

Isabel and Faith while Helipad collapses 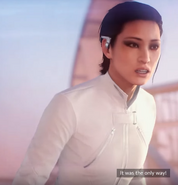 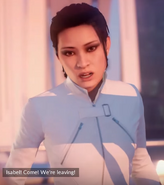 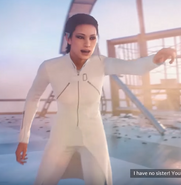 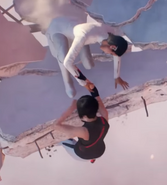 Isabel observing Faith in her prison 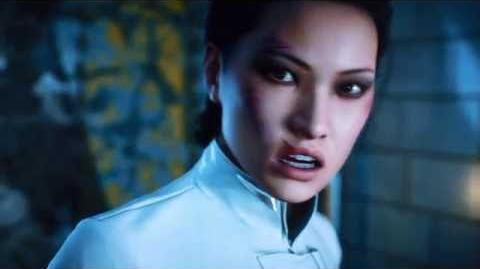