When Icarus was seventeen he spotted a runner from his bedroom window. Two days later he snuck out of the apartment, a small rucksack strapped to his back and dead set on becoming a runner himself. Life on the rooftops has never been easy, but Icarus is a fast learner and he soon made a name for himself as a fast, safe, and dependable player.

He is counted among the very best, second only to Faith Connors. Noah took him into the cabal while Faith was in prison, and the two have developed a close bond. Like Faith, Icarus runs mainly for the thrill of it, and every day he revels in this life which is very different than the one originally staked out for him. But unlike Faith, he is not very impulsive, and his skill comes from careful calculation rather than brash risk-taking. He detests being compared to her, and he decided long ago to not let her tarnish his reputation once she was let out of juvie. 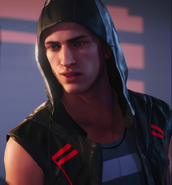 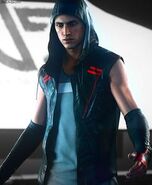 Icarus
Add a photo to this gallery

Retrieved from "https://mirrorsedge.fandom.com/wiki/Icarus?oldid=13136"
Community content is available under CC-BY-SA unless otherwise noted.