President and CEO of Kruger Holding
Chairman of the Conglomerate Council

Even though Gabriel Kruger has inherited his ancestor Dieter Kruger’s zeal and vast intellectual capacity it hasn’t come with the basic faith in humanity that Dieter exhibited. Gabriel is convinced that what he’s doing is for the best of the Conglomerate, Cascadia, and its inhabitants, and he is well aware that some hard sacrifices are needed to ensure that the Conglomerate rules supreme, and that House Kruger rules the Conglomerate.

His son, a regular police officer, was killed in the initial outbreak of the November Riots. Gabriel learned of the death only moments after it happened and his deep contempt for the protesters and their naive ideals turned into a bitter hatred. He has since spent his life advancing KrugerSec. He has also taken great pains to raise his daughter Isabel to one day assume the heavy mantle of leadership, and in so far as he is able to love anyone, it would be her.

The City of Glass was previously a city known only as SE-31 in reference to its south-eastern location. It wasn't until after an event called the Kruger Uprising that the region began to grow again, with the promise of free enterprise attracting a slew of ambitious citizens looking for a fresh start. Gabriel Kruger is thought to be a the namesake of this uprising. 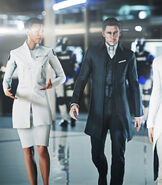 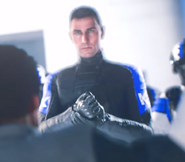 Kruger during November Riots
Add a photo to this gallery

Retrieved from "https://mirrorsedge.fandom.com/wiki/Gabriel_Kruger?oldid=13107"
Community content is available under CC-BY-SA unless otherwise noted.