Clarence E. Kreeg, referred to as Kreeg, is a Runner who works with both Mercury and Drake.

Working as a runner for Drake, Kreeg comes under attack by a masked Austen Reynolds who was after the photos Kreeg was carrying in his bag.

Fortunately, Faith Connors arrived to fight Reynolds off. Later, Faith called upon Kreeg to tell her where he had gotten the photos from in order to continue an investigation she was conducting on said photos.

When Merc said to Faith he was training above the trains, surprised, Faith said that was not necessary for him because he could stay all day above the trains if he wanted.

After escaping Robert Pope's office, Faith was pursued by the City Protection Force. Mercury then tells her to escape via the nearby Centurian Plaza and meet up with Kreeg. After sliding down an incline and falling through a sheet a glass Faith encountered a waiting Kreeg, who helped her escape.

Later, he was employed by Mercury to deliver a Barrett M95 sniper rifle to a vantage point for Faith, so she could use is to stop a convoy carrying her then arrested sister Kate Connors and free her from City Protection Force custody.

Kreeg's file can be seen on a large monitor during a cutscene in Chapter 6 when Faith discovers the true purpose of Project Icarus and the PK Training Facility. 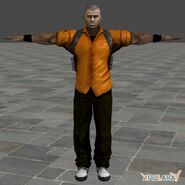