Celeste Wilson is a Runner and a close friend to Faith Connors and Mercury. A born survivor, she takes pride in the pure artistry of running, but, despite her flamboyance, she harbors a deeply embedded cynicism towards her life as a Runner.

Not much is known of Celeste prior to the events following Robert Pope’s murder. However, it is assumed that she started her life as a Runner after Faith. This is evidenced by her lack of knowledge of the ex-Runner Jacknife. Trained by Mercury, but working for Drake, Celeste started becoming disillusioned with the dangerous life of a Runner and began privately wishing that she could lead a more fulfilling life, quoting that, “Survival is overrated. You need to live a little too,” after Faith expressed that Runners lead a life of survival.

Celeste became involved in the Project Icarus program some time before the events following Robert Pope’s murder, due to being blackmailed by Callaghan. This is evidenced when she says “Him [Robert Pope] or me,” when confronted by Faith in level 7 (Boat). It is unknown how Callaghan actually confronted Celeste, due to her advanced maneuverability as a runner to flee Callaghan, or perhaps Celeste said she was blackmailed to cover up her actual intention of being involved in the Project Icarus program to take down the Runners, regardless of her main intention to live the life she secretly wanted.

Mayoral candidate Robert Pope, once a prominent member in the Liberates movement against the Citizenship Program, was putting unwanted pressure on Project Icarus and it was thus decided that he be dealt with.

Employing Celeste as an assassin, with the involvement of Travis Burfield, Pope’s head of security, it was decided that Pope should be killed and that a member of the City Protection Force should be framed for it.

Meanwhile, Celeste continued her business as a Runner, helping Mercury retrain Faith after the latter had recovered from an accident. The framing of this CPF officer, the newly commissioned officer Kate Connors, caused Faith to become involved and chase after those who framed her sister.

While holding no personal grudge against Faith, Celeste was employed to dispatch her. After assassinating Travis Burfield, however, as she was responsible for Pope’s death, she was soon targeted and pursued by Faith; resulting in her attempting to ambush her with Blues forces in the New Eden Mall. After this ambush, Faith discovered that Celeste was a traitor.

Faith would eventually catch her on a Burfield Shipping container in the City of Glass harbor. However, after an intense stand-off, Pirandello Kruger forces intervened so Faith shoots gas canisters causing an explosion allowing her to escape. It is not shown whether Celeste escaped or perished in the fire and she is not seen or mentioned again at any point in the remainder of the game's story. However cut dialogue in the in-game files from Jacknife confirms that Celeste died in the explosion. 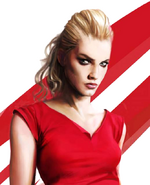 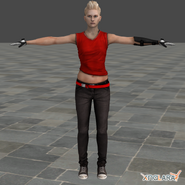 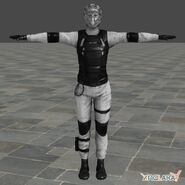 Cel in her civilian guise

Celeste in her Pursuit officer uniform